Today Jeff Sweat and Rockstar Book Tours are revealing the cover and an exclusive content for SCORPION, the sequel to his YA Dystopian, MAYFLY which releases June 23, 2020! Check out the awesome cover and enter to win an ARC! 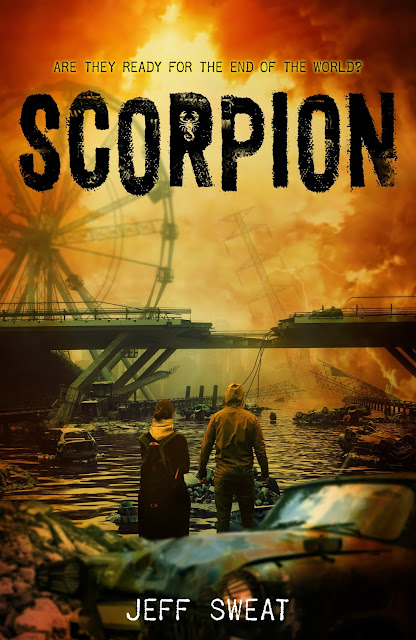 In Scorpion, the sequel to Jeff Sweat’s YA futuristic thriller Mayfly, Jemma, Lady, and Pico all left the Holy Wood to seek answers to the End, and when they find the Old Guys—the only adults to have survived the original wipeout of everyone over the age of seventeen—they think they’ve found help at last.

But there’s a lot the Old Guys aren’t telling them. In fact, some of them don’t seem interested in solving the End at all and just want Jemma and her friends to leave. Meanwhile, war is brewing among the tribes of the rest of the Children. Jemma’s old home has fallen into disorder, and is far from prepared for battle. It won’t be long before the fighting reaches Jemma and the Old Guys, if they even live to see it.

Little Man tries to wait for the screaming to stop before he enters the battlefield, but he can’t help himself.

The ice cream carts are tossed carelessly around the outside of the bank that used to be Ice Cream Men’s Hydin Hole, as if giant hands had been digging for toys. The Ice Cream Men are lying on the ground, just bodies now. It’s a horrible, bloody mess, carried out by monsters. Little Man hasn’t been so proud of himself since the first time he made a Giant.

One of those Giants stands next to him, breathing hard and splattered in blood. Patrick. He used to be one of Little Man’s enemies in the Cluster, but now he’s as loyal as he is mean. He’s also frozen in time by the Making that will keep him from dying young, and that stimulates extra growth. Seeing him plowing through the Ice Cream Men as if they weren’t there? That’s a good day.

Stanford, his captain and Head of the Jocks, makes his way through the wreckage, not looking down at the bodies at his feet. “A hundred down on their side, Little Man,” Stanford says.

“And us?” he says. Not that he cares. He wishes he had been able to bring the Last Lifers with him to jump in front of the Ice Cream Men’s bullets, but the Cluster said it would be too much for this battle. They’re still stung by the loss to the Kingdom only weeks ago. Little Man wasn’t leading that one, but the Chosen has been coming to rescue him. The blame got so intense that Little Man had to kill one of the captains of that attack to shut them up.

The Cluster, the council that thinks it still runs the Chosen, warned him not to do this. The Ice Cream Men were too important. They provided too much food to the Chosen. What they really meant is they brought all the delicacies and the pills the Cluster loves.

“How many guns?” Little Man says.

“There should be more.” Still, the Cluster will be happy. It will give Little Man all he needs to launch the real war against the Angelenos—and the Kingdom.

“We have some survivors inside the bank,” Stanford says.

“Start questioning them,” Little Man says. He doesn’t want to kill them all, not yet. He wanted more weapons to make sure his war goes his way. Everyone knows the Ice Cream Men held all their extra weapons and riches in safe spots throughout Ell Aye, places they called Hydin Holes. It would only take a few living victims to flush those out.

Blood coats the glass wall of the bank next to him. He steps out gingerly among the bodies. He pushes down his revulsion. He doesn’t mind this. He knows he’s looking at the beginnings of the Battle of Ell Aye.

The boys and girls lying on the ground are mostly dead. When they’re not, he motions to Patrick, who casually stabs them with his lance.

He steps over a body—and sees the body stir. He looks down, calling for Patrick. The boy beneath him rolls over, and Pico starts. He’s never seen this boy before—but he has. This is the Ice Cream Man he saw in a vision in the Haze, the one who traded with Jemma and Pico and Lady.

And he really wants to know where Jemma and Pico and Lady are.

“Let’s keep this one breathing for now,” he says to Patrick.

Little Man squats next to the boy and drips water down his throat. Gently. “It’s okay,” he says. “It’s all gonna be okay.”

“Doubt it,” the Ice Cream Man says. He’s right. Looks like he’s been shot in the gut and the leg.

“You some kind of nurse?”

The Ice Cream Man blinks. He tries to focus on Little Man, but his attention falls to Little Man’s arm, to the tattooed bars on the inside of his wrist. He’s thinking what they all think: Three kills, on a kid who is this small and this young?

The boy’s voice comes out as a croak. “You Little Man,” he says.

“I don’t look . . .” The Ice Cream Man stops, and forgets what he was going to say. Maybe it’s the blood seeping out of his thigh. Someone has tied it off in a tourniquet. “You come for our guns,” the Ice Cream Man says.

“You a tiny little weird little dick,” the boy says.

“Well, now I like you less,” Little Man says.

How much time does he have before the Ice Cream Man bleeds out? Five minutes? He has to get him talking.

“We got friends in common,” Little Man says. “The kids from the Holy Wood.”

“I want to know where they went,” Little Man says.

Little Man shrugs. “I mean . . . maybe? But they know something I wanna know. So I would probably want to talk to them first. Like . . . this.” And he pushes his thumb into the Ice Cream Man’s stomach.

The kid can’t even scream, it hurts that much. The kid just gasps until Little Man stops pushing. Little Man says, “They know things about the End, I think, things that I should have known first. And Jemma can see things.” He hates that she can see things. It was supposed to just be Little Man.

Little Man moves his thumb back to his stomach. “I can make your End as painful as you like.”

“She’s gon find the Old Guys,” the Ice Cream Man says, seeming to want to pull the words back in. Everyone betrays their friends, Little Man thinks.

“The Old Guys?” Little Man tries to be gentle again, but it doesn’t come as naturally this time. He wants to know too much.

“She gon find all the answers there,” the Ice Cream Man says. “They was there fore the End. They knows the way back. Don’t you knows the stories?”

“I didn’t,” Tommy says, and an angry flush creeps up over the pink skin. “Where do they live?”

“Fine. Don hurt me none. Stories say they lives in the Dead Lands,” the Ice Cream Man says. “That’s a good place for you.”

“Let’s talk more about that,” Little Man says. “Let me get you more water.” Trying to keep him alive just a few minutes longer.

When he turns back, something looks different. The boy has shifted. Trying to get away that close to dead? Tommy’s impressed despite himself.

Little Man crouches down. “Here’s your water,” he says.

“You believe in Man Jesus?” the Ice Cream Man says.

Little Man scowls. “I only believe in me,” he says. Then he notices the egg.

All of the Ice Cream Men carry them, Long Gone bombs to protect their carts from thieves, just like him. Tommy thought his soldiers had collected all of them, but there’s an egg in the Ice Cream Man’s trembling hand, fingers twitching under a pulled-out pin, just barely holding down the lever that will release and kill them all.

The Ice Cream Man gathers himself up and throws the egg as far as he can. Not much of a throw. Not much. But it drops at the feet of the clump of Chosen ten feet away.

“Shit,” Little Man says. He sees the blur of a huge body in front of him, feels a hand punch him in the chest, feels himself flying backward through the air.

Three, two— He doesn’t hear the blast, just sees the white swallowing them all. He has the most ridiculous thought: Hello, Man Jesus.

Jeff Sweat has made a living from words his entire career, starting out as an award-winning tech journalist for InformationWeek magazine and moving into marketing.

He led the content marketing team for Yahoo and pioneered its use of social media. He directed PR for two of the top advertising agencies in the country, Deutsch LA and 72andSunny. He now runs his own Los Angeles–based PR and marketing agency, Mister Sweat.

He grew up in Idaho as the middle of eight children—seven boys and one girl—and attended Columbia University in New York. Jeff lives in a big blue house in Los Angeles with his wife Sunny and their three kids, two cats, and a racing greyhound.

He loves to travel and writes everywhere he goes, even when there’s not a desk. He likes karaoke, motorcycles and carpentry. He was once shot in the head with a nail gun, which was not a big of a deal as it sounds. But it still hurt like crazy.

Giveaway Details:
1 winner will receive a signed ARC of SCORPION, US Only.

Chapter One
The Mayflies

Welcome to Simply Daniel Radcliffe, your online resource dedicated to the British Actor Daniel Radcliffe. You may know Dan from his roles in "Harry Potter", "Swiss Army Man", "Horns" and many more. Here you will find the latest news, images, and videos,. We are home to the largest gallery in the whole worldwide web with over 130,000 pictures including photo shoots, appearances and events. We hope you enjoy your stay!
Shop With Amazon

We have a list of products to share with you so view our Amazon Page and buy something for that special friend just click the button below.

Welcome to Dan’s Official Site. Since moving out from Google Plus and its services ended Dan’s management team made a website on SquareSpace. This is now his official site for news updates and much more.

Who Do You Think You Are?

Emmy’s
Join us on Facebook
SDR on Graham Norton

Happy Birthday to the most wonderful human being o

I finally watched this and it was so funny. I thin

Our gallery faces closure. We cannot work without

Harry Potter and the Chamber of Secrets Promotiona

Read our newest book review Come Home, Indio: A Me

Did you like the photo I posted yesterday? Its bee

Send the content you wish to donate at simplydanielradcliffe@gmail.com with the subject ‘Contribution’. All donations will be 100% credited!

Donate
If you like this site and visit it regularly, we would appreciate if you donate anything you can to help this site continue. Your donation will be used to help with hosting bills, domain name fees, magazines, dvd's and whatever else we need to make this site run the best for you. So please donate we need your help or buy me a coffee.

Put your name on the list for your pairing or movie.

Dan & Dane DeHaan
Kill Your Darlings
What if
Horns

Go to the Fanlisting Collective for more